Karen Armstrong on Women and Islam. 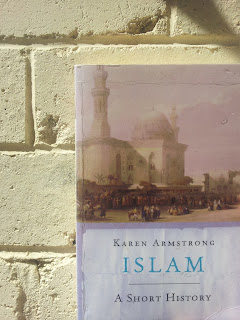 Karen Armstrong, in Islam: A Short History, summaries the condition of women within early Islam and the quranic prescriptions on gender relations:

“The emancipation of women was a project dear to the Prophet’s heart. The Quran gave women rights of inheritance and divorce centuries before Western women were accorded such status. The Quran prescribes some degree of segregation and veiling for the Prophet’s wives, but there is nothing in the Quran that requires the veiling of all women or their seclusion in separate part of the house. These customs were adopted some three or four generations after the Prophet’s death.  Muslims at that time were copying the Greek Christians of Byzantium, who had long veiled and segregated their women in this manner; they also appropriated some of their Christian misogyny.  The Quran makes men and women partners before god, with identical duties and responsibilities. The Quran also came to permit polygamy; at a time when Muslims were being killed in wars against Mecca, and women were left without protectors, men were permitted to have up to four wives provided that they treated them all with absolute equality and show no signs of favouring one rather than the others. The women of the first ummah in Medina took full part in its public life, and some, according to Arab custom, fought alongside the men in battle.  They did not seem to have experienced Islam as an oppressive religion, though later, as happened in Christianity, men would hijack the faith and bring it into line with the prevailing patriarchy.” (p, 14.)

The blog was founded in 2008. It mostly contains essays I wrote prior to and during my undergraduate degree in Sociology and Political Economy (2009-2012). New posts tend to be abstracts for upcoming talks and papers, random things I write up, and the occasional guest post.